Drama in the Omegaverse

So, with Addison Cain's blog exploding all over Romancelandia social media in the wake of #copypastecris, it's not surprising that questions arose as to the validity of her claim of plagiarism, since her blog doesn't go into detail proving it. I'm not a lawyer, I kind of assume she can't discuss all the legal stuff openly. I also am not super familiar with the law when it comes to copyright of a storyline (although I know it's possible, even if harder to prove than when someone lifts lines directly), but I am an author and I have an English degree (ought to be good for something, right?), and, more importantly, I'm Addison's friend. And while I need to be working on my own book (which is due to the editor Monday) and spending time with my baby (only 5 months old) or sleeping because I'm currently working a day job as well (with overtime at the moment), I decided to take the time to re-read Born to be Bound as well as the Zoey Ellis book in question, Crave to Conquor. Because Addison deserves it and also because HOLY CRAP THIS IS A BIG DEAL if plagiarists can turn around and drain authors dry with nuisance lawsuits.

I haven't told Addison I'm doing this, by the way, this is all on me.

I've personally experience Addison helping me, supporting me, sharing my work, and encouraging me to write in the Omegaverse (<--click for guide if you have no idea what I'm talking about). I was reading her LONG before I 'met' her on Facebook and as far as I know, she really was the first person to write MF Omegaverse. That's how I found her books actually.

Since then, more authors have entered the MF Omegaverse and she has promoted them with genuine excitement that more people wanted to do MFO. One thing that I keep hearing over and over from the group of Indie Authors that I've gotten to know is that we all need to support each other. We can't write as fast as readers read, so having recommendations of similar work is GREAT for the in between times. Addison has embodied that. I don't know of a single author who DOESN'T feel like they can go to her at any time with a question or appeal for advice or to ask if they can post their newest release in her group. Just recently,  I saw MD Pentacles post her most recent MF Omegaverse release in Addion's group. 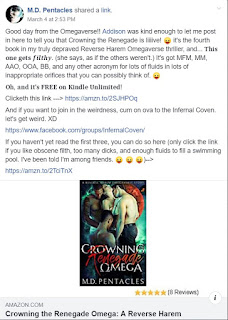 I couldn't fit Addison's response to this post in one screen capture, so here it is - 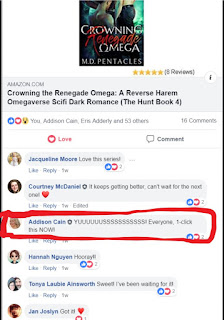 Now how is this important to what's going on? Well, partly I'm defending Addison's honor, because she's seriously so supportive of people writing MF Omegaverse. She even promoted Zoey Ellis' work when she was asked - she didn't give it a personal recommendation but she did let her readers know that someone else had written an MFO book if they wanted to check it out (we indie authors cross promote often, but there are a lot of authors who won't, esp if they haven't read the author in question before, but it doesn't surprise me to know that Addison was all about helping out a newbie author who was writing in her genre... it's just the way she is). It was those readers who let HER know, "hey... so there's a lot of glaring similarities between your books."

Claims being made that Addison is doing this out of competitiveness or comparisons of her to Faleena Hopkins really grind my gears because that's SO NOT ADDISON. She's deeply embedded in the indie community (unlike FH), never has a bad word to say about anyone, and has actually been SILENT while all of this has been going on for over a year because she didn't want to bring other people into drama.

So, moving on, let's get to those similarities, because they're what's at the heart of people questioning her validity.

Now, being that they're both writing in the Omegaverse, we can set aside similiarities like the class structure (Alphas on top with Omegas for mates and Betas somewhere in the middle), the "knotting", the estreus / heat / haze, and the idea that there's one Alpha to rule them all. That's all part and parcel of the Omegaverse.

That both heroines have similar names - whatever. Not a big deal. This happens all the time.

That both heroines are virgins - also not a big deal, we romance authors love deflowering virgins.

That both heroines are kept in one room, day in and day out, never seeing anyone but their alpha, eeeeeeeh, okay. Shaky ground here again. But it's possible to write two totally different stories using that same premise.

But let's getting into the full plots.

The beginnings of the books are very different. Ellis sets up a fascinating world within the Omegaverse, full of magic and a sassy historian. It's easy to feel like this world and book has NOTHING to do with Addison's, right up until 32% of the way in when Cailyn is in the middle of an audience with Emporer Drocco, in a crowded room, and suddenly her suppression of her omega nature begins to fail.

This is also where the similiarites begin.<<<EDIT: I want to be very clear here, it's not just that these things are in both books, this is what happens in both books, scene after scene, beat following beat with only a few differences between the plot structure. I've read a lot of books that have the same tropes, ideas, whatever... but they didn't follow each other's outlines like this>>>

Addison's book begins with Claire entering a crowded audience chamber when her suppression of her omega nature begins to fail.

Drocco takes notice and takes Cailyn from the room before anyone else notices. Shepherd kills some of the men and then traps Claire in the room.

Both heroines fight against their need before the sextravaganza starts. In Addion's book, the characters fuck, in Ellis', Cailyn manages to erect a barrier to keep them apart, so they end up having self-pleasured sextravaganzas.

In both books, the next part is a sextravaganza that lasts for days, interspersed with occasional questions about the Omegas. The biggest different in how the heroines are treated - Drocco always eats with Cailyn, Shepherd never eats with Claire.

Next up - both alphas then demand that their omega share her personal history. Both omegas blame Alphas aggressive, terrible ways for why the omegas don't want anything to do with them. Biggest difference in the questioning - Drocco threatens sodomy to force Cailyn's reveal, Claire shares hers more willingly as a way of throwing her revulsion for all Alphas in Shepherd's face.

Obviously both heroines are upset after this talk and depression starts to seep in.

Things then veer away from each other for a bit as Addison's book takes a side plot meander that Ellis' doesn't.

During this time, both alphas punish their omega by denying her 'knotting' (which gives the best completion) and realize that it's not the best form of discipline for them. Drocco holds out longer than Shepherd, who only attempts it once before making that decision, whereas Drocco is explicity told by an advisor that doing so is detrimental to building a relationship between them.

There are some other similarities within the books, but none quite so obviously beat for beat until closer to the end of Crave to Conquor, which has beats lining up pretty closely with Born to be Bound again.

Claire manages to escape and so does Cailyn under vastly different circumstances. That's cool.

They both then deal with betrayals by their omega allies. One omega in particular has decided that they need Shephered and so leads the others in betraying Claire. One omega in particular insists that Cailyn go back to Drocco (this was odd to me since her reasoning was that Drocco had to be Cailyn's true mate, but the other omegas didn't add their immediate support). Claire is knocked out and returned to Shepherd. Cailyn is returned to Drocco's city without her memories and then knocked out as the book ends.

Like I said, I'm not a lawyer. I have no idea if this much would satisfy the legal definition of plagiarism. I DO know that Addison's publisher felt confident enough to file DMCAs on her behalf. I DO know that these are an awful lot of coincidences and I'm not at all surprised that many readers contacted Addison after she was nice enough to recommend Ellis' book and they went and read it.

I do have a couple of questions.

Why is Ellis claiming that she was harassed / defamed in her lawsuit when Addison has literally said absolutely NOTHING about it for over a year and Ellis did not have any evidence submitted to back up this claim?

According to the court document posted by Courtney Milan, Blushing Books publisher has only EVER filed two DMCA take down notices (page 12, item 34)... to me, this is pretty significant. Again, I'm not a lawyer, but I'm not the one who told them they have a case either.

A good friend tells their friend when they think they're in the wrong. After having spent my day doing a comparison of Addison's book vs. Ellis', while I think Ellis put in a lot of things to try to make it different enough from Addison's, she also copied a whooooole lot. I guess it will be up to the court to decide, but after doing my homework, I know I don't feel the need to tell Addison that I think she's wrong to keep up this fight.


UPDATE - a reader / reviewer / blogger, In Between the Pages, has done a breakdown of the events that have been happening around the lawsuit suing Addison, as well as the misinformation that has become widespread.